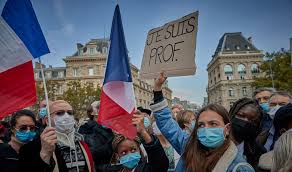 Protest in France after beheading of Samuel Paty.

Abdalla Azonov had lived in France since the age of 6 but it was in a segregated Chechen community. He was not a good student and had not assimilated into the larger French society.

We might ask why he carried a large, sharp knife on his person. He also carried religious beliefs deeply embedded in his being. And on October 16th, he beheaded a French school teacher in a suburb of Paris.

As I listened to this on the French news and heard the word “beheaded” my mind went to images of the French Revolution. Tumbrels (two-wheeled open carts) conveyed “criminals ” to the guillotine, for their beheading, among them the French Queen, Marie Antoinette as well as King Louis 16th. It was not only for what they had done but for who they were. 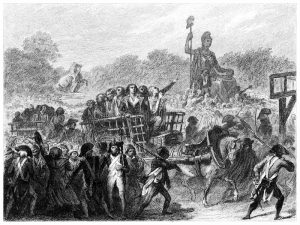 And now, on October 16th of 2020 it was Samuel Paty who was beheaded by Abdalla Azonov in a suburb of Paris. Paty had been instructing his students about freedom of speech. In so doing he referred to the Mohammad caricatures which had appeared in the French magazine Charlie Hebdo as examples of the liberties of the French press to ridicule any religious or political topic.

Agonov, was offended by his “blasphemous” remarks and took it upon himself to punish the wrongdoer.

The French State and the French Schools, on the other hand stand for freedom from religion as the foundation of a secular state.

A few blogs ago, I wrote about Charlie Hebdo’s recent republication of those images. The proponents of freedom of expression seem prepared to go the extra mile to underline their position. They have hardened their stance and seem prepared to face the consequences.

This kind of stubbornness does not bode well for a resolution. But I don’t think they are interested in
a resolution as much as in entrenching themselves in their beliefs. The other side, of course, never even
aimed for a solution.

French President Emmanuel Macron called the decapitation “a typical Islamist terrorist attack”, thereby angering Turkish President Erdogan and other Islamic leaders. But it is now understood that Agonov as well as the members of the group that murdered three at a church in Nice, France on October 29th were not members of a political or terrorist group and espoused no political agenda.

The Islamists on their side, hold fast to their view of fundamental Muslim beliefs. To them, religious wrath is an acceptable way of responding to attacks on their faith.

You cannot see the same landscape standing on a fundametalist platform as you do standing on an secular one. These two positions are irreconcilable. There is no middle ground, no possibility of negotiation.

And so they face each other across a chasm of incomprehension.

I am gazing across that chasm.

If you have an opinion about this, please write me a comment. I’m interested in how you see it. 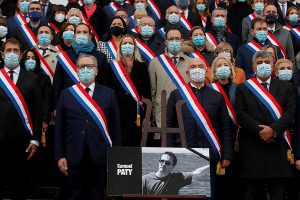