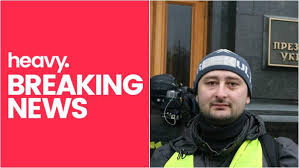 Death and Resurrection may sound like the title of a novel by Leo Tolstoy but it is actually the story of an elaborate fake event. On May 30 Arkady Babchenko, a Russian journalist and Putin critic, was reported to have been shot outside his apartment in Kiev. Not an unusual story for the region. Since 1992, 58 reporters have been killed in that part of the world. Everyone is used to such occurrences.

Babchenko, 41 had served in the Russian army and fought in Chechnya. He then became a journalist and worked as a military correspondent. He also wrote books about his experiences. As he started being more and more politically active and critical of the regime he became a target.

And so the Ukrainian Secret Service concocted an elaborate plot and staged what looked like his assassination. Babchenko, smeared in pig blood was loaded in an ambulance and rushed to the morgue. Even his wife, who identified him was supposedly not in on the secret. The Ukrainian Authorities subsequently arrested an individual who was allegedly paid $40,000 to kill the journalist.

Then, surprise! Babchenko appears at a press conference in Kiev, back from the beyond. He and the Ukrainian security services happily announce the success of the sting operation.

Babchenko’s immediate family had been planning his funeral. At a moment, their sadness and tragedy disappear. A good ending, right? But is it?

Reporters Without Borders expressed their indignation at this manipulation of the news. This is a dangerous game they say. It is taking fake news to the next stage: Fake facts! It plays right into the hands of the news manufacturers by undermining the credibility of the press and eroding public confidence in it. This is already at a low ebb. Do we want to sink further down? Does this mean that anything goes as long as “good” results are achieved?

We need to think about this.

I have mixed feelings about this. It’s great news that Glad Babchenko isn’t dead, but now I wonder if he and his family are in greater danger. He’ll probably have to hire security for quite a long time. He should have used his fake death to create a new identity.

Babchenko is now living in an undisclosed location in Ukraine and has 2 bodyguards that follow him everywhere he goes. He broadcasts a call-in show about Russian current events once a week from a small Ukrainian television channel. He was condemned by many of his colleagues for the spectacle and feels like an outcast among many of his closest friends.

What he did was a little foolish and now he is suffering the consequences.

wpDiscuz
3
0
Would love your thoughts, please comment.x
()
x
| Reply
You are going to send email to
Move Comment