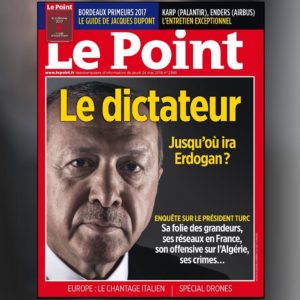 On May 28th, a group of Turkish young men in Avignon, France temporarily succeeded in removing a publicity poster for the magazine Le Point. What had angered them was a somber looking picture of Turkish President Recep Erdogan on the cover of the magazine with the word “Dictator” in bold yellow print next to his forehead and the caption “How far will he go?”

The gendarmes were called, and the poster was eventually returned to its place. President Erdogan is in the midst of running for reelection and the incident is troubling because it reveals Turkish intolerance for free expression. 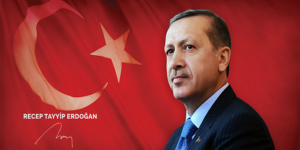 President Erdogan’s authoritarianism is growing rapidly. There are now questions about whether he himself engineered the failed coup d’état of July 15, 2016 so he could rid himself of his political opponents. Mass arrests and purges ensued which included not only the military but also civil servants, university professors and scholars.

In 1938 the Reichstag Fire (which was started by the Nazis) had already served a similar purpose, by giving the Nazis an excuse to consolidate their power and eliminate the opposition.

Erdogan put the blame on Fetullah Gulan, an Islamic scholar who created a social movement outlawed in Turkey and who is now living in exile in the United States. Erdogan has loudly demanded his extradition.

Ever since Recep Erdogan came to power his goal has been to dismantle Mustafah Kemal Ataturk’s reforms. Ataturk (Father of Turkey) was an army officer who founded an independent Republic of Turkey out of the ruins of the Ottoman Empire. He served as Turkey’s President from 1923 to 1938. Although his regime was authoritarian, he instituted reforms which westernized and secularized the country.

Erdogan’s repression is gaining momentum and moving at an accelerated pace as though he is impatient to dynamite the whole edifice Kemal Ataturk created. In addition, he is now bombing his own Kurdish population within the country.

For a long time, he has petitioned for entering the European Union, but President Macron of France is wise in opposing this move. Unfortunately, Turkey is already a member of NATO.

Certainly, much of this echoes in our country today. A Dictatorial leader scrabbles to hold onto power by besmirching people and institutions who are dear and important while he seeks to invalidate our free press. Against this background his “accomplishment” is to undo what his far wiser predecessor accomplished. And it’s all done with a seasoning of hatred and, most recently, cruelty towards children.

Freedom of the press is one of the main pillars of a democratic society, more important even than free elections. In the United States, the First Amendment protects the rights of all citizens to express their views and opinions without fear of reprisals from any government agency. It is no accident that our current President is attempting to muzzle the press by impugning its credibility and integrity. This constitutes a clear and present danger.

Thank you, Simone. The parallels between Erdogan and our current President seem very clear.

I agree. Anytime there is something in the press that makes him look bad, he claims that the “Fake News” is just out to get him. His followers believe everything he says and can’t believe how much everyone seems to be out to get him. I think that it’s amazing that they seem to have completely forgotten how bad they treated President Obama after his election.
The country is becoming fractured by his racist rhetoric and I’m afraid it will be very difficult if not impossible to recover from it.

I think that more people will realize what a complete fraud he is and won’t make
the mistake of voting for him again. Or will they? Hmm!

I’m sure that in this election Trump will be scrutinized for everything he’s done. But, he’s able to convince his followers to believe his “alternative facts” and manipulate them, working them into a frenzy. More than ever before we need a strong candidate to expose his for the lying bigot that he is.

I think we can do this. Many people are already convinced. We can push him over the edge and let him fall.

Funny how this sounds a lot like the ‘Caveman’, if you know what I mean. Always calling everything fake when it’s not in his favor and pushing lies down the throat of his followers who I wonder would not take out time to make research themselves and see what is true and what isn’t.

That is why we need a government of laws.

Laws are there to protect the rights of all citizens to express their views and opinions without fear of reprisals from any government agency. But it’s just unfortunate that in some countries, even with all the laws, the government still has power suppressing the truth people share. And I begin to imagine who the law is now made for.

wpDiscuz
8
0
Would love your thoughts, please comment.x
()
x
| Reply
You are going to send email to
Move Comment