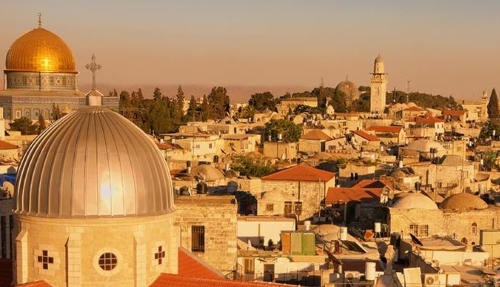 “If I forget thee O Jerusalem, let my right hand forget her
cunning, let my tongue cleave to the roof of my mouth”
-Psalm 137

Jerusalem has been Israel’s capital since the days of the Bible and Jews have prayed to remember Jerusalem for 3,000 years. It was King David who, at the sound of the trumpet, brought the Ark of the Covenant to a tabernacle in Jerusalem.

Today it is also the capital of Israel. Much as I cringe at the idea of agreeing with Trump on anything, he just accidentally happens to be right. The Knesset (Parliament) is there. So is the Prime Minister’s Office as is the U.S. Consulate. In 1995 the Congress of the United States passed a bill calling for the U.S. Embassy to be moved to Jerusalem from Tel Aviv. Successive presidents did not act on this bill for fear of offending the Arab Community.

Jerusalem’s name means City of Peace. It is sacred to the three great religions. To the Jews it is the site of the original Temple. For the Christians it is the city of the Crucifixion. It is also the third most sacred city of Islam  after Mecca and Medina.

But instead of peace, it has known bloodshed, strife and conflict and all the crimes mankind commits in the name of religion. For centuries Israel has striven to regain its statehood (lost in many conflicts) and the day finally arrived after more than 1000 years, when the United Nations recognized the State of Israel on May 14, 1948. What followed was an immediate invasion of the country by the armies of Egypt, Syria, Jordan and Lebanon. In July 1949, after Israel defeated the combined attack, an armistice was signed, and Jerusalem was divided between  Jordan and Israel. Henceforth Jews were not allowed on their sacred Temple Mount. It was only after the Six-Day War in June 1967 that Israel, in a stunning victory,  captured the Sinai Peninsula (which it has now returned to Egypt) the Golan Heights, the Gaza Strip (which Egypt did not want to take back), the West Bank of the Jordan and the whole of Jerusalem which it has administered ever since.

There have been many aborted negotiations about the creation of two states, the status of Jerusalem and the problem of the refugees who fled or were chased out during the wars. No solution has been reached. Neither the West Bank nor the Gaza Strip wants to recognize the state of Israel. Israel cannot incorporate them into a bi-national state for fear of losing its Jewish identity, with the Jews becoming a minority in their own country.

Israel is also determined never to let go of Jerusalem again. Its administration of (mostly Arab) East Jerusalem has been called neglectful (another contentious topic). The situation is complicated by the fact that Benjamin Netanyahu’s regime is plagued by corruption and he may be replaced in the near future. Add to that the Saudi-Iranian rivalry and jockeying for power in the region and you have a very volatile mix And now our blindfolded, lumbering President has blundered into this shaky terrain where an avalanche could happen at the slightest misstep. Hold on tight for 2018.

Claiming Jerusalem as a capital (and denying one to the Palestinians) is another affront to the entire world community. “Corruption” does not even begin to describe the crimes against the farmers and ordinary people of Palestine. Modern day Israelis add to this hubris every day. It doesn’t matter what religion you believe in, stealing, oppression and hubris are not acceptable.

Ma’am: Jerusalem is for the Jews, the capital of Israel because the Bible says so? Really? Is the Bible a real estate document? If it is then what is the difference between Jews and Islamic fundamentalism.

You recollect 3000 years of Jewish history, please remember, for the last 50 years Jerusalem is an Israeli occupied city and it has non-Jewish inhabitants living there at least for the last 1000 years

Palestinian residents of Jerusalem have as much right as Israelis to say it is their capital as well.

There are so many inaccuracies in your account of Jerusalem’s history that it’s hard to know where to begin. Before the creation of the modern state of Israel in 1948, the city had not been “Israel’s capital since the days of the Bible,” except perhaps in the sense of “Israel” as the Jewish people, wherever they were in the world. There hadn’t even been independent Jewish rule of the area since before the arrival of the Greeks in the 4th century BC. But a more recent event in the city’s history is more emblematic of today’s Isreal: the deadliest terrorist… Read more »

The history of Jeruselm is so very complex. It is home to 4 major groups and 3 religions.
One of my absolute favorite movies is the Kingdom of Heaven. It tells a story of a divided Jerusalem as the prize of each victor. Yes, Jerusalem was originally capital of the Jews. But the whole world lays claim to Jerusalem.

The history of Jerusalem is indeed very complex and I struggled with writing it . No matter what you say, there are a lot of aspects that you miss. So I am glad that people are adding bits and pieces.
Simone

I agree that it is difficult to find a topic of agreement with our obnoxious president. But as they say, even a broken clock is right twice a day. I think that it’s very brave of you to express your views about Jerusalem on your blog. There are so many many people that strongly disagree with you but I’m glad to read your opinion.

It is hard not to be emotional about Jerusalem.