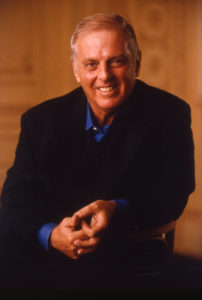 He lists his nationality in this way: Palestinian, Argentine, Spanish, Israeli.

His Russian-Jewish parents emigrated to Israel when he was 9. He had already performed his first piano recital.

Like so many musicians, he was precocious. He started playing the piano at age five, but his greatest achievements were to be as a conductor.

In 1954, Daniel Barenboim took conducting lessons. His teacher, Wilhelm Furtwanger said, “this eleven-year-old is a phenomenon.”

Barenboim traveled all over Europe and America giving piano concerts and making recordings. As his career matured, he started to spend more and more time as a conductor. 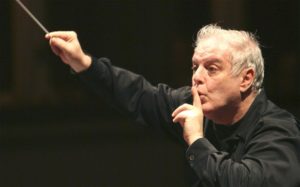 Music is a universal language and its practitioners can live and be creative anywhere in the world. They can also choose their allegiances and the ones he chose are interesting in their priorities.

In 1999 he and Edward Said (a Palestinian-American Professor of Literature at Cornell) founded the West- Eastern Divan Orchestra. Headquartered in Seville, Spain, it is made up of young musicians from Egypt, Iran, Jordan, Lebanon, Palestine, Syria, Israel and Spain. It is meant to be a model of cooperation across political and religious divides. The intent is to promote understanding between Israelis and Palestinians.

The Orchestra is named after a collection of poems by Goethe inspired by Persian prophet Hafez.

Barenboim says, “Divan was conceived as a project against ignorance and to create a platform where the two sides can disagree and not resort to knives.” Barenboim is a critic of Israel’s occupation of Palestine.

In 2012 the West-Eastern Divan orchestra performed for Pope Benedict XVI in the courtyard of his summer residence at Castel Gandolfo in Italy.

This year, Barenboim’s book, The Sound of “Utopia was published. It traces the history of the orchestra from its beginning.

In the next blog, I will further explore Barenboim’s life and career including his association with the cellist Jacqueline du Pre.

Editor’s note: Here is a link to an interesting YouTube about the West-Eastern Divan Orchestra. Very compelling personalities in this group.

Very informative as usual. I always look forward to reading your insightful posts. Keep them coming.

I’m sure you must know that Daniel Barenboim and the West-Eastern Divan
Orch. will be at Zellerbach on Nov.10th, 3-5PM. Will you be going? It’s
almost sold out already. I’d very much like to go, but would need to act
quickly, since it will probably sell out in the next day or two, if not
before.

I am a huge fan of classical music and hardly a week can pass without me listening to consoling tunes.I am thrilled that the Russian Cutural Centre in Tanzania is organizing one evening this month to bring a troupe to Dar-es-alaam to play classics free of entrance charge. Best Regards, Salim

I am glad you are enjoying classical music in Tanzania

It seems that Daniel Barenboim is mired in controversy about the harsh way he treats his musicians. The man has such an extraordinary history that it’s not surprising that there will be numerous critics hounding him. I wish him the best and am sure that his life story will be told for many years to come.

Barenboim has written several books including, Music Quickens Time, A Life in Music, and recently Everything is Connected: The Power of Music. I’m interested in reading Everything is Connected because the description states that it is for, “the curious mind that wishes to discover the parallels between music and life and the wisdom that becomes audible to the thinking ear.” What an enticing thought!

What a wonderfully busy and interesting man.

I’m already a YouTube Subscriber on their channel. They have got great video content and are always out to feed your soul musically. Their concerts are amazing and I’m very sure that if they bring one to my country, I’ll definitely attend.

I listen to it every day.

Music can really unite us.

This group made me fall in love with classical music in no time. My husband is a huge fan and I just found myself enjoying the performance they put up at every stage. They are the perfect group of people to give you just what you need as a music lover.