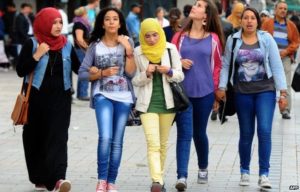 On The Move, But How Fast?

Emmanuel Macron recently visited Tunisia and declared that the Arab Spring was alive and well in the country. Women’s emancipation started there in 2011. The constitution declared equality between men and women and Tunisia became a progressive pioneer in the Muslim World.

But political flattery only goes so far and ignores powerful counterweights. It is true that many women go about in western clothes and wear no head scarves. In 2018 the interdiction against women marrying non-Muslim men was abolished. A new generation has come of age in relative freedom.

And yet a woman can only inherit one half of what a man inherits. Single mothers are still “an infamy.” Alternative life styles like LGBT are under Islamist menace. Patriarchal family traditions persist though not visible to the casual visitor. 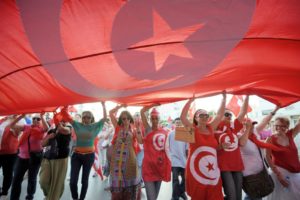 Six years after the “Jasmine Revolution” of 2o11, new protests reflecting frustration at broken promises are erupting. Some men resent the rising employment of educated women when the unemployment rate of non- educated men is still very high. And a new risk of militant violence can spill over from neighboring countries like Algeria and Libya.

Women Still In Prison…Literally and Figuratively 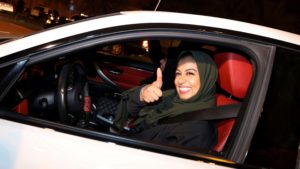 Saudi Arabia finally entered the 21st century (or is it the 20th?) by allowing women to drive. Women are rightfully celebrating. One woman said ”Saudi Arabia will never be the same.” Another enthused, “I feel like a bird.”

But this permission has graciously been granted to them as a favor from the Saudi Crown Prince Mohammad bin Salman. The women activists who fought for it were imprisoned and are still in prison! This new right also only affects a very small number of women and many males continue to prohibit their female relatives from driving. 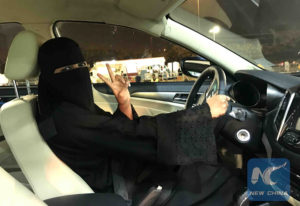 Other improvements in lifestyle due to the monarch are: The reopening of public cinemas, lifting the ban on public concerts, and allowing women in sports stadiums.

But Saudi Arabia is the birthplace of Islam and still has very strict limitations on women’s rights. All women in the kingdom must have a “wali,” an official guardian, usually a male in the family. Women need their guardian’s permission for many activities: marriage, travel, signing contracts, even reading magazines and trying on clothes and there is no redress for domestic violence or sexual abuse. Many public places are segregated, and public buildings have separate entrances. (Does this ring a bell?)
The dress code is strictly enforcedt. Women wear an abaya (long cloak) and a head scarf.

So let us not yet rejoice for Saudi women. Sadly, they are still in prison. Rather, may the liberated women of the world communicate to the women in Tunisia and Saudi Arabia that we stand with them.

It is my hope that progress for these women continues, and at a faster pace. My experience as a host mother in the 1980’s and 1990’s, for young male students from Saudi Arabia and The United Arab Emirates, was chilling.

It feels like a magician’s cheap game…on the one hand, he is making small sacrifices so the Western World will say “oh good job what a reformer!” but meanwhile internally he is suppressing dissent and firming up his control at a rapid pace. He is just another dictator in a long line of dictators with a little play towards his audience.

“Women can drive, but only if their male guardian says so” is not much a freedom.

Recently, Saudi authorities announced changes that now allow women over 21 to travel and obtain passports without permission from their male guardian. But, it isn’t clear if they are allowed to travel abroad though there have been reports of women traveling successfully. Time will tell if this is the case and it’s just one step in many to allow gender equality.

This is just a publicity stunt. In reality, Saudi women can hardly take a step without a male guardian.

They are definitely not free yet if you ask me. They still live and work under the shadow of men, still looking for permission to get productive. It’s pointless. If you want to grant them freedom, do that completely and not acting like you gave it to them but still using other means to control it.

wpDiscuz
5
0
Would love your thoughts, please comment.x
()
x
| Reply
You are going to send email to
Move Comment